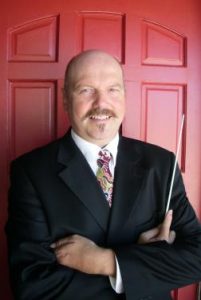 Arno Dittrich was born in Germany and received his music degree in Percussion at the Hochschule für Musik in Frankfurt/M, Germany and his Conducting degree at the University in Trossingen/Germany. He joined the Tucson Concert Band in 2009.

He played several years as an extra for the Frankfurt City Opera Orchestra in Frankfurt, Germany and many other orchestras in the Rhein-Main-Area in Germany. He also performed with the German Chamber Philharmonic in London, England, and toured Spain with the Staatsphilharmonie of the state of Rheinlandpfalz. At the World’s Fair in Seville, Spain, he performed in concerts with violinist Anne-Sophie Mutter.

For nearly 15 years, Arno served as Musical and Administrative Director of the Musik-and Kunstschule Büdingen in Germany–a private music, art and ballet school, subsidized by the city, state and National government in Germany, employing 38 teachers with an enrollment of 1100 students.

Additional experiences include serving as High School Band Director at the Büdingen Gymnasium and Music Director for the city of Büdingen in 2003, he gave Master Classes at the University of Mainz in Germany and workshops for many local amateur bands, he was leader of Band Sectional rehearsals for percussion, State Youth Orchestras and Judge for Percussion at state and regional German youth competitions.

Presently, Arno is also a member of the Arizona Opera as principal timpanist.

Associate Conductor – Chuck Jarrett is a retired band director who taught high school band in Iowa and Kansas. As a clarinetist he has played in the Evansville Indiana Philharmonic, the Lexington Kentucky Philharmonic, and the Cedar Rapid Iowa Symphony. During the Bicentennial years, he was in the Armed Forces Bicentennial Band as a Marine Corps Musician. The band toured all 50 states as part of the Bicentennial celebration. He earned degrees in music from Eastern Kentucky University and the University of Iowa. He joined the Tucson Concert Band in 2016 and plays clarinet and bass clarinet.

Conductor Laureate – Lorelei Allison Conrad, LCDR, USN, Ret. began her professional career as a US Navy Musician first as an enlisted trumpet player with the US Naval Academy Band and later making naval history as the first woman to receive a commission as Ensign, becoming the first woman to serve as a Navy Limited Duty Bandmaster. Her assignments included Director of Navy Band San Francisco; Associate Conductor, US Navy Band, Washington DC; Interim Music Liaison Officer for Chief of Information at the Pentagon; Fleet Bandmaster, US Seventh Fleet in Yokosuka, Japan; Director of Training Armed Forces School of Music; and Fleet Bandmaster, US Atlantic Fleet.

Tucson Concert Band Board of Directors